It was late June. I had just punched the clock for the day and was headed to Dupont Circle to meet up with a gal pal I hadn’t seen since we were both in Israel in 2009. After a joyous embrace, we sat at the bar for happy hour cosmos and sangria. As my heel casually dangled off of my right foot in proper single-lady, post-nine-to-five style, my gal pal and I effortlessly caught back up to where we had left off the last time we were together. We laughed over some stories past, briefly summarized the past couple of pre-DC years for each other, and then got into the meat of the conversation. It was late June, and we were just two single ladies, sipping cocktails, and discussing men and housing. But I’m getting ahead of myself.

In August 2011, I arrived late one night in Rockville, Maryland to move, sight unseen, into a house with two roommates I knew little to nothing about. I soon learned that the house used to be a group home for the mentally ill, and that all of the discoloration on the walls and ceilings was plaster covering the many holes left from the house’s past life. Within three and a half months of moving in, I would not only come to understand why my new home’s previous residents had felt so inclined to produce such a plethora of holes in the walls, but I would also, through the fermentation of inner fury, disappointment, and self-respect, quit my suburban nonprofit job that had brought me to choose this housing in the first place.

The house was one of those houses that no matter how much you try to clean it, it always feels dirty. In the beginning, I tried to be optimistic, and simply covered the array of peculiar stains on my bedroom walls with artwork or furniture. But even if I could have transcended the well-rooted filth, I was still destined to become the prisoner of the home’s broken record of sounds.

One of my roommates was rarely seen. I would occasionally catch her in the kitchen for a quick chat, but more likely would simply see her quick flash as she’d slink back into her room. However, I knew her far too intimately from the noises she contributed to the soundtrack of the house. The first was a steady thumping that came from her room for periods of thirty minutes to an hour at a variety of times throughout the day. It was too steady and monotonous to signify the making of the love, so I eventually ascribed it to some sort of oddly timed workout routine. The second noise that will forever paint this roommate in my memory was of the bathroom variety, as my room was the unfortunate neighbor of our shared bathroom. In fact, it wasn’t just a neighbor, but a close and personal friend, sharing both a door and a vent. When I first moved in, the bathroom’s fan was so loud that it would shake the shared wall and wake me from a dead sleep. But it gets better. Because I also got to become the lucky recipient of learning what happens to the digestive system when all you ever eat is microwaveable soy products. I learned about this at 7pm. I learned about it at midnight. I learned about it at three in the morning. For, if it wasn’t the fan waking me up at 7am, then it was definitely the flatulence waking me up at 2am.

My other roommate had one of those naturally whiny voices, a couple of octaves too high. In addition, she had a little dog and a jock-like, Jersey Shore-type boyfriend to go with it. While her dog would bark incessantly, she would talk to it in full, high-pitched tone. “Do you love your mommy? Do you need to go potty? Should I take you potty?!” At this point, her boyfriend would walk in through the door and, in his deep, vacuous tone, would join the chorus, “Babe…babe…hey, babe…what should we do tonight, babe?” But the best would be when the squeaky female voice would ask the thickheaded male voice if he could ask the yipping dog if it needed to go potty. The chick. Is asking the dude. To ask the dog. If it needs to go potty.

The rapid deterioration of my home-life sanity mixed with the prohibitive nature of my hour commute into D.C., left me with images of pulling out my hair, and climbing up into the attic to live with the lost souls the house had taken before me. One day in March, when I thought there was no way I could take it any more, I got in touch with a woman on Craigslist looking to rent her basement apartment in D.C. I showed up to view the place with excitement in my bones and promise in my heart. Not only did I immediately love and covet the unit, but I also thought the landlord was terribly lovely and all the feelings I had about the place were telling me that it was just the right place for me to be. Alas, when I brought up the idea to my roommate/landlord about giving her two-months notice to move into this sanctuary I had just found, she denied me the option of ending my lease early. And so, with my tail between my legs and my head hung low, I retreated back to my lone insanity. That night, I began a countdown on my calendar of the days until I would be free at last — 134, the end of July.*

Flash forward now, back to happy hour with my gal pal. If it was late June at the time of our meeting, then you better believe that I was knees-deep, ready to find my new home in the city. But, at this point, I had already come to realize that the road was going to be a bumpy one. Disillusioned by the high cost of living in D.C., I had temporarily convinced myself that I would not be able to afford to live alone. So, that evening, when I left my lady pal, I would be leaving to meet a potential new roomie in a two-bedroom near the metro. I was nervous and teeming with wonder. I had a good feeling about it. My friend and I discussed my upcoming roomie date and housing woes in general, as she was also then enmeshed in the arduous D.C. housing search. And so, as we spoke of men and housing, somewhere along the way, I noticed the phrases became jumbled. It was hard to decipher which belonged to which topic.

“I mean, I just don’t want to like him more than he likes me. Maybe I should back off a bit.”

“I have her number. Should I send a text that I’m on my way? Is that too clingy?”

I left my lady date filled with excited butterflies, and decided, after deep analysis with my friend, that a simple text wouldn’t be too clingy. Rather, we determined that it would show my commitment to making this an open, honest, and viable relationship. Quickly after sending the text, I was met with a response that the girl’s landlord had decided to move a personal friend into 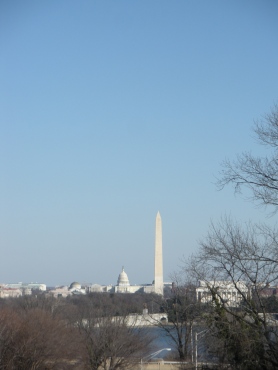 the room instead, not giving the girl any say in it, so the open house was cancelled. The girl seemed genuinely upset to let me down like that, but I understood. It just wasn’t meant to be. My happy hour buzz quickly died. As my metro car continued on to my suburban reality, passing the stop where I would have gotten off to meet my future roommate, I figured I’d cure my heavy heart with a night of ice cream and chick flicks. Then, it dawned on me.

Finding housing in D.C. is like looking for love in the city. It’s a balance between playing hard to get and swooning at all the right times. It’s lust and love; it’s hurt and heartbreak.

I’m happy to say that as I write this blog, I have joyously and infatuatedly wedded “the one.” But the tortuous road that brought us together is what I would like to share. For the few months it took me to find my beloved apartment represent an almost too perfect example of the Rom Com Reality in the wild.

For those of you unfamiliar with the Rom Com, or Romantic Comedy, Reality, please refer to my previous post that explores this concept in further depth. Having that base knowledge will make your understanding of this piece much more valuable.

This is a detailed story, ripe with emotion, and therefore cannot fit into a single post. For your reading enjoyment, I will be posting it in parts. This introduction is part one. Stay tuned.

* Please note that my roommates were, actually, pretty good people regardless of how much I loathed their mannerisms over time. Really, a majority of my discontent can be boiled down to me being a closet misanthrope, which can be read about more in depth here.