When my uncle was in town a few weeks back, we met downtown for dinner and grand conversation. On the night walk back to the metro, in light of one of our discussions, he said something along the lines of — when it’s all over, all that’s really left are the stories we can tell. (I apologize, Uncle John, if this is a paraphrase that has diminished in accuracy over time.) As a result of my genetic makeup, I tripped on this for quite some time until it eventually got filed away on some scrap of paper in one of my many notebooks. Yesterday, however, I came back to this thought, as I sat on a cold D.C. park bench absorbing the faces of the stories around me.

I have this ability to not be able to be left alone wherever I go. Regardless of the location or the types of people around, someone will come up to speak with me. Further, lacking the ability to ignore people, I usually wind up engaged in some sort of conversation. I don’t mind this though because at the end of the day, these are the stories I remember and the next time I pass these places, I see faces. They are the stories that shape my environment and grow my interest in various topics, from public policy to philosophy. There are two in particular so far that I think are worth sharing. The first comes from before I became unemployed and the second comes from after my self-inflicted drop into chaos. I like how they juxtapose each other, while also building bridges between their similarities. They paint the faces of our nation’s capital.

A few weeks ago, I was walking, of course, to my favorite coffee shop in Dupont Circle. It was my ending to a long workday. Out of sheer laziness, I had simply thrown a sweater on under my blazer to look a bit more casual and less like just another suit. I was feeling like a classic twenty-something trying to figure out where she belongs in a big, cold city when I met Don. Don was sitting outside of a Chinese restaurant in a tattered puffy coat. He had a grizzly beard and, like far too many of our nation’s people, Don called the little outdoor places where he could tuck himself away from the elements home. On this night, Don asked me as I passed if I could buy him dinner. The Chinese restaurant by which he sat had a five-dollar special, he informed me. That’s all he wanted and he wouldn’t bother me for anything more. Not one to typically carry cash, I figured the chance that I actually had a five-dollar bill in my purse that night was enough of a sign that I was supposed to meet Don. I offered Don the money, but he refused. He just kept repeating that he wanted me to trust him that what he really wanted was food. Despite how much I tried to relay my trust to him, he seemed too broken down inside to be able to believe me. Finally, he took it, but then just as soon, he handed it back.

“Please, the truth is that I don’t even trust myself anymore, and ma’am, I just need to eat.”

As I looked into Don’s eyes and I thought of how weighing my own day had felt, I realized that beyond all differences there was one thing that Don and I wholeheartedly had in common that chilly night. In our own ways, we were both starving for connection. We were both looking for the glitter to light the uncertain path. We were both human.

I’m not telling this story to get applause for buying a homeless person a meal. There are far too many people homeless on the streets each night for my personal response to deserve any type of applause. Someday, when I pass some truly social structure changing policy, you are all invited to clap. For now, I’m telling this story because of the mere interconnectedness of everything, for the moments that turn a storefront into a lasting memory, for the hope that one day we will treat each other as equals.

He sat on his stoop with his beef lo mein and he spoke to me of what he knew as truths.

I thanked Don for his wise words. We shared a handshake and a fist bump and then I was on my way. Now every time I pass that stoop, I see a face. I have a story. I have human connection.

Yesterday, I had an interview with a temp agency in D.C. I put on my black slacks and black blazer and a pink button-up (you know, to show my individuality) and headed downtown. It went well and I got added to the list of other job seekers seeking temp work for the time in between. Afterwards, I considered just going home, napping even, but instead I just started walking. I walked and I 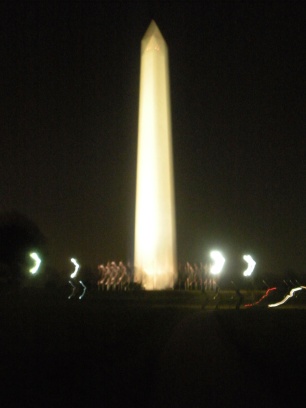 thought and I looked around. I thought of all the unemployed people in this country and then I started walking through a grassy plaza area where homeless people speckled the benches. They looked so cold. Flustered, I plopped my own self down on a bench in this plaza and battled the dilemma of social inequities in my mind. It’s the nation’s capital and the example it’s setting is this. It’s infuriating to think about. I kept watching the people pass by. The suits, the tourists, the cold and hungry. Soon, I decided I wanted to feel what it was to be cold and so I sat, determinedly, on the bench for another thirty minutes with nothing but my thin blazer and the wind.

During this time, I met Leonard. Leonard was a big soul of a man in business casual attire. He reminded me of a Thanksgiving dinner. He happened to be waiting for the bus near the bench on which I was sitting and took a moment to tell me that I had a great smile. I hadn’t even realized I was smiling. It was nice to know.

Leonard and I got to talking and he asked me if the stuff I was writing down in my portfolio was for work. I didn’t tell him that my notes were on the observation of human behavior. Instead, I simply replied that I was currently unemployed, so was just working on some things to help me get more organized for the job search.

“Oh baby, I know how that goes. (And I could feel in his words that he did.) I have been there. Trust me, if you just keep smiling like that, good things will come your way. They will. The world needs that.”

Leonard works in the mortgage industry and had a wonderful kindness to his speech. As he spoke to me about hanging in there and taking care of myself, I saw a single tear slowly fall from his eye. He asked me if I needed something to eat and told me it would be an honor to grab me a little something from one of the street carts before he had to go. I looked at myself in my interview attire and gave a quick glance to some of the other occupiers of the plaza’s benches. I was tickled by this offer. I’m telling this story because of the mere interconnectedness of everything, for the moments that turn a park bench into a lasting memory, for the hope that one day we will treat each other as equals.

Leonard tried to hand me a five-dollar bill before he had to get on his bus. I politely declined, but told him thank you. My thank you was not just for the offer, but for the chance to share a moment of human connection.

“I’m just saying, I’ve been there, baby. And I was told that someday if I saw another like me in need, that I would return the favor.”

Before he walked away toward his bus, he extended his hand, beckoning the meeting of my own. He kissed the top of my right hand, told me to keep my smile and that things would work out, and he walked away. His honest concern for me with just the quick mention of my unemployment warmed my soul, though my exterior was quite chilly at this point. I realized that those around me might find it a tad odd that I be sitting there on such a chilly day with no coat. I decided to go grab a latte to warm up a bit. When I returned to my park bench with the latte in hand, I looked around for just another ten or so minutes more. I watched as one man looked into a trashcan, paused, then took off his glove to reach in for a lost treasure. I was beyond lucky to have my latte and to have people like Leonard to remind me that we’re all in this together. Because at the end of the day, all that’s really left are the stories we can tell.